f there’s one word our April CityMaker has used to describe any of his achievements, it’d be humbling. However, we would call them outstanding and worthy of praise. A self-proclaimed “unnatural” Boston Red Sox fan, a lover of oysters, and an accidental teaching “lifer,” Dr. Daryl Ward moved to Polk County when he was 9 years old from Jacksonville. His father instilled in him that an education would lead him to a profession that he could enjoy and be proud of. That education led him to a career in education, but it wasn’t entirely on purpose.

Though he began his teaching career as a sort of “interim” job before he could find something else that interested him, he ultimately stuck with it because he had found his passion. Today, he’s in year 30 of a career in education, and there’s no turning back.

After all these years, Daryl advises others interested in a teaching career to be sure they’re going into it for the right reasons. He’s learned that this career path is an “opportunity to make a difference in young peoples’ lives and to make the community a better place.” As April’s CityMaker, we believe he’s done just that.

A proud product of Polk County Public Schools, Daryl graduated from Mulberry High School and headed  for Palm Beach Atlantic University to study Marine Biology. Marine Biology didn’t stick, and in an unplanned search for a new major, he recalled always enjoying and excelling in writing. He transferred to Florida State University to be closer to his future wife, Julie, and began studying Creative Writing.

After graduation, Daryl asked himself the question that so many young people have asked after crossing the stage, diploma in hand: “Okay, what now?” 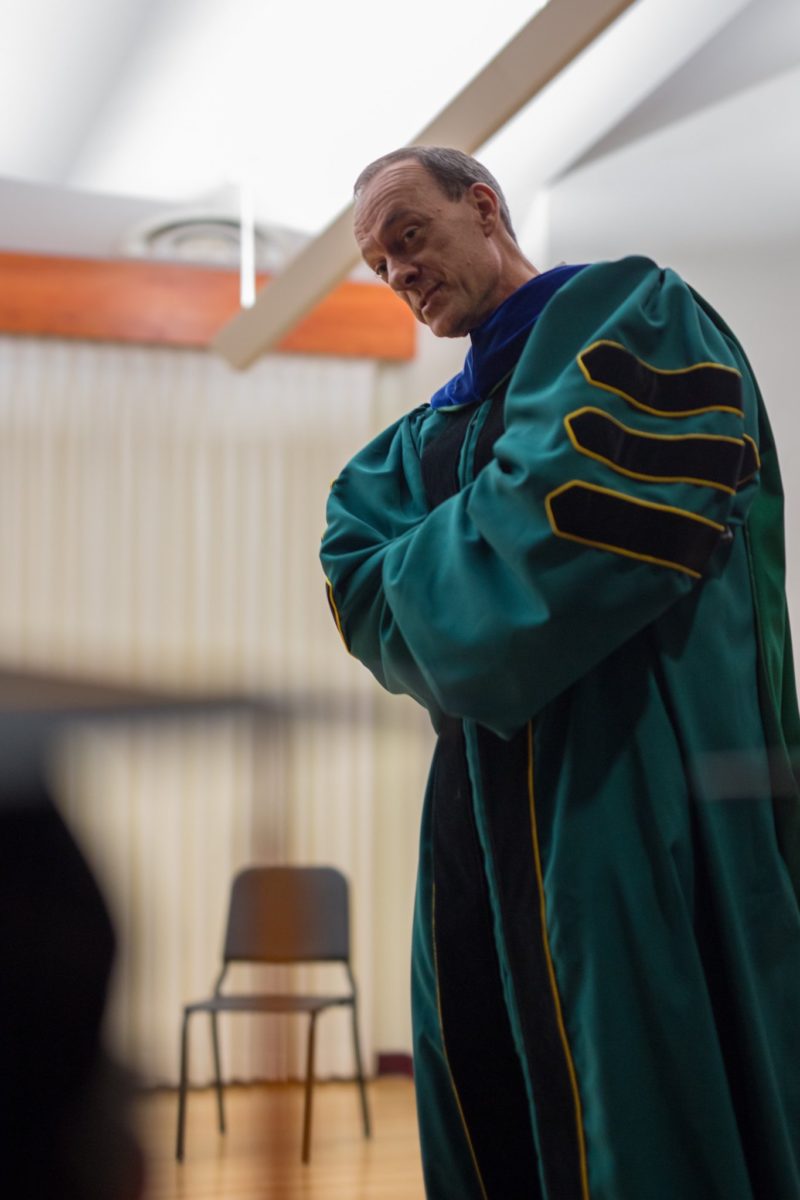 He and Julie moved back to Central Florida, and after his wife took a job teaching at an elementary school, he took a job at Kathleen High School teaching Creative Writing and English. And, spoiler alert, he loved it. He says he never expected to continue in education, but after a few years in the profession, he was hooked. He moved from Kathleen High School to his alma mater, Mulberry High School, where he taught many subjects over the course of 15 years. He began to see it as an opportunity to connect with young people, make a difference in their lives, and subsequently, strengthen the community.

Daryl was all in. He went back to school to pursue a Master’s in Educational Administration to eventually become a school-based administrator. After that, he became a dean at Mulberry High School, an assistant principal at Harrison School for the Arts, and now the principal at Polk County’s only arts high school. Later, he even returned to school once again to get a doctorate in Curriculum and Instruction from USF.

Daryl and his wife, Julie, are both principals at art schools in Lakeland. She is the principal at Rochelle School of the Arts. Needless to say, their dinner conversations are always interesting, and Daryl says he learns from her every day.

“She’s the best principal I know,” he said. “We both are passionate about what we do. I tell everyone that I will die on the hill of public education. I’m a passionate supporter, which also makes me one of its most stringent critics. We can do better. We need to look for ways to better educate our students.”

Chances are, if you have lived in Lakeland for any amount of time, you’re familiar with Publix, George Jenkins, and the role he and his Super Market have had on our community. He’s a cherished figure in our history, and his family plays a huge role in making Lakeland one of the most philanthropic cities in Florida.

Last Spring, the then-chairman of the Lakeland Chamber of Commerce board, Janice Tedder Jones, asked Daryl to get Harrison involved in the Chamber’s annual meeting, a meeting honoring the Small Business of the Year and the George Jenkins Award for Community Leadership recipient. She planned on honoring the philanthropic legacy of George Jenkins and all he did for the community at this meeting and hoped Daryl could get some students involved. After brainstorming and batting around several ideas, Daryl finally said he would write a musical.

During the following summer and fall semesters, Daryl got to writing. He set out to highlight three important ways Jenkins gave back to our community: how he helped his employees, how he helped individuals without broadcasting his deeds to the public for recognition, and how he gave to various causes in the community. So he wrote a song about each of these philanthropic efforts.

After months of writing the script and lyrics, he sent his work to former Harrison student Tyler Campbell to write the music. Suzi Lambert and Laurel Renfroe, faculty members at Harrison, joined forces to choreograph, cast, and direct the musical. When the school premiered it at the Lakeland Chamber Annual Meeting in January, Daryl said, “It was way better than I wrote it.”

The performance received positive feedback from people at Publix, who told Daryl that he truly was able to capture the kind of person George Jenkins was and how he shaped this community. But on top of that, Daryl said it was powerful to show the Chamber and our community what the young people in our city can create, contribute, and accomplish. 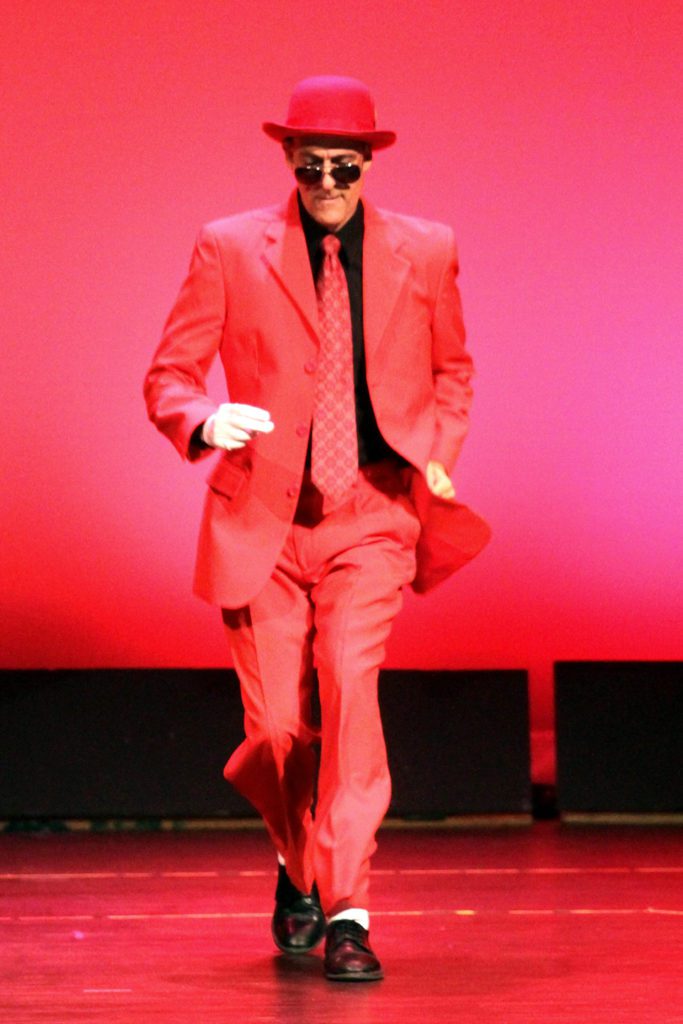 March 14 was the one-month anniversary of the mass shooting at Stoneman Douglas High School, and a nationwide walk out was scheduled to occur. Administrators were given guides on how to handle the protests, so they knew what to do. Two students came into Daryl’s office because they wanted to do something to commemorate the event. After they ran the idea by two major student organizations and Principal Martinez at Lakeland Senior High School, the students and faculty started planning the event.

The event was not a walkout, instead, it was a planned, voluntary school assembly. Some students spoke or sang. Someone read the names and rang a bell for each victim, and everyone observed 17 seconds of silence. At the end of the assembly, there was a closing speaker and a rose petal ceremony.

That day, Daryl shared a post on Facebook commending the students for organizing the assembly and for demonstrating what they’ve learned. “To take those things they’ve learned in their respective classes and apply them in a productive way, that’s why you send your students to school,” he said. “It was important because it showed the students how they can lead and come up with things. It showed them how the democratic process is supposed to work, speaking your mind and [doing] that in a productive way.”

To Daryl, the assembly was a lesson in civics for Harrison and LHS students, as well as other members of the community. People don’t all agree, he said, but that’s the beauty of it. He believes seeing someone’s else’s perspective and engaging with each other in a civil manner, whether you agree or not, is a skill all students should hope to take away from their education.

Daryl says he has many names he’s proud to have – dad, husband – but outside of family, the one he’s most proud of is “teacher.” In his 30 years in education, Daryl has a ton of stories and memories, and he’s always happy to hear from a former student.

He thought it was truly humbling when a former student of his said he was the reason she became a teacher. His response to her? Think it through. Think of the children and the community in which you’re working, because if your heart’s not in it, you’re doing everyone a disservice.

In a time where education seems to be a hot topic, we are so grateful to have Daryl among us bringing his excitement for teaching and turning our students into powerful thinkers and creators.

“I want them to be better people when they leave,” Daryl said. “It makes the school a better place, hopefully, it makes the community a better place by investing in young people, and the biggest way I do that is by letting them know that I believe in them. You can do powerful things when people believe in you.”

Daryl has chosen to believe in the young people in this community, he’s chosen to give his students and his faculty room to grow and room to fail. And by doing so, he’s made his school and his community a safer place to grow, improve, learn, make great art, and bring positivity to those around us.

Here’s to a generation of future CityMakers, and the current CityMakers that show them the way.