You are here: Home1 / Past CityMakers2 / February 2018 CityMaker: Kay Kasser Making the impossible more attainable is what our February 2018 CityMaker does best. Kay Kasser is the owner of Alive Culinary Coaching, a service dedicated to making healthy eating simple and full of flavor.

After being diagnosed with an array of health issues, one doctor suggested a diet change, and it’s completely transformed her health. Kay went to work and developed healthy versions of her favorite recipes.  She loves to share her recipes and to guide anyone ready to make the shift to a healthier lifestyle.

A Lakeland native, Kay worked as a teacher in Atlanta for 13 years. When she retired, she returned to the town that she has always called home. To Kay, what makes this city such a special place is the people. It’s this love of people and her drive to help those in need that make her an irreplaceable CityMaker in our community.

The Storm of the Year

Think back to the beginning of September 2017, a week before Hurricane Irma hit. Lakeland was scrambling to get ready for the storm, despite a wishy-washy forecast. Kay, recalling that time, said she kept feeling like God was telling her to “prepare, prepare, prepare.” After church that September 3, a friend mentioned that he kept hearing the same message. Immediately, they began to prepare for the storm. A day later, that same friend asked “what about Combee?”

Her friend and ministry partner, Harry Walter, was referring to the Combee Settlement, an impoverished community in East Lakeland.  Kay is familiar with the area and has worked with a couple of people in that area for the last 2 years.  Kay, along with Harry and her husband Dave Kasser, has worked to help these people stay on their feet.  Knowing the condition of the mobile homes in the area and the number of people without any home at all, she could not stop thinking about just how dangerous the storm could be for them.

“Literally, I could see the people in the woods, and they didn’t even know that a hurricane was coming,” Kay said.

Determined to spread the word, Kay checked with all the agencies to see if there was transportation to a shelter for these folks – there wasn’t (unless they had a cell phone or internet access).  The only resource available for those in the area was to call Citrus Connection to take them to the shelter, and they weren’t even aware that it was available to them. Kay, Harry, and Dave took matters into their own hands, making flyers, coordinating bus schedules and finding a driver. Rebecca Wroten, owner of Haka Fitness, and her mighty warriors gathered pillows, blankets and snacks to bring to the shelter.

After the storm while the power was out, Kay and groups of volunteers from Haka Fitness, her Highland Park Church family, and many others just wanting to help, would go to the hardest hit neighborhoods each afternoon to pass out donated Subway sandwiches, hot meals donated by Caribbean Slice and Stacey Adams (who, with her family, made enough homemade chicken and dumplings to feed the whole area!), lots of hugs, flashlights, screen, insect repellent, bags of food, and ice… attempting to meet as many needs as possible.

Once the last person received their supplies, Kay felt an overwhelming sense of relief and allowed herself to cry. Everyone in the outreach area had food, water and knew they mattered.

From this effort, an outreach, Combee Connection, was born. The ministry now hands out food and other necessities once a week, takes more than 50 people to church (it is growing every week)and goes out to walk the streets and visit with every one of their bus families each week. 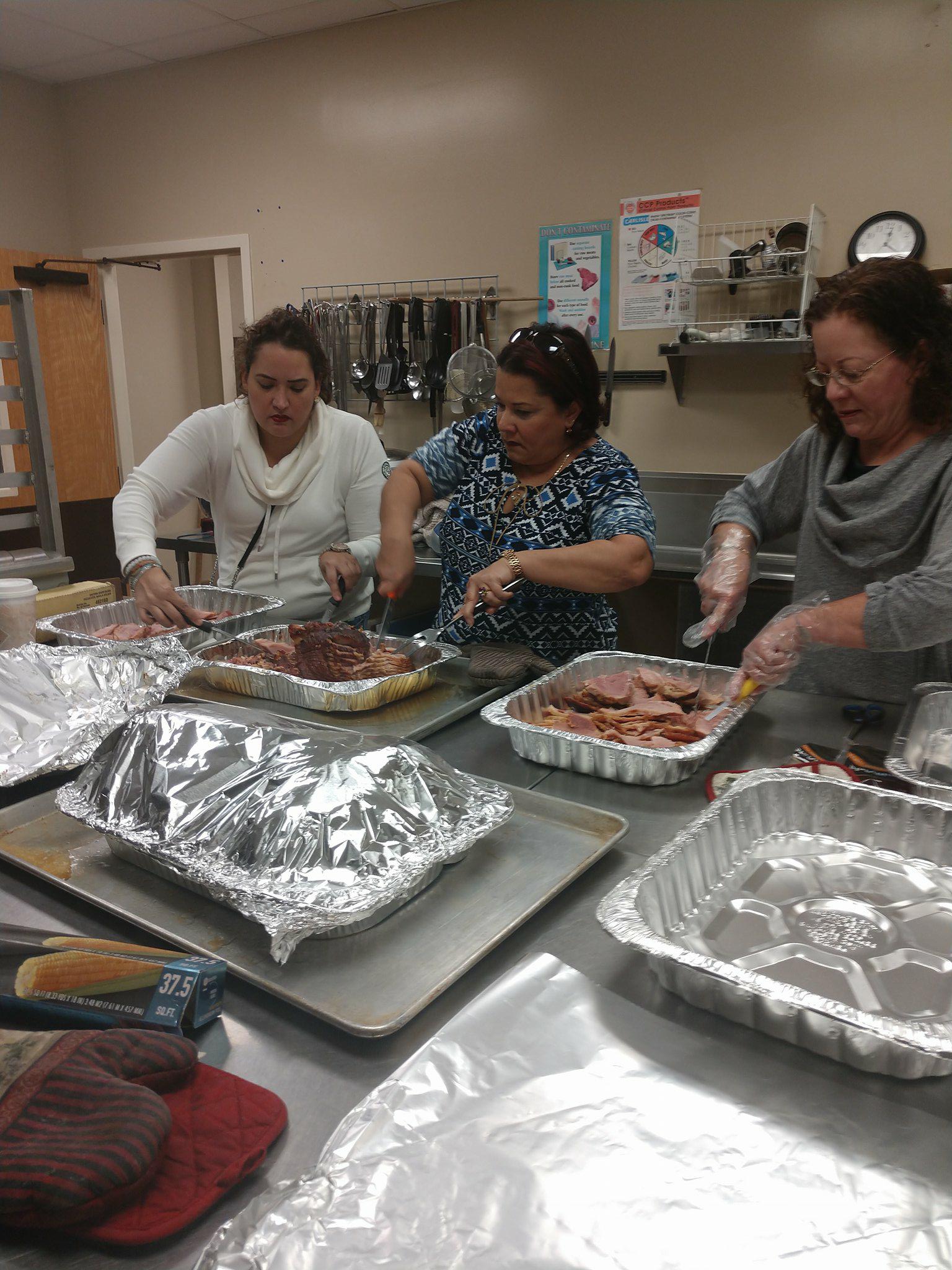 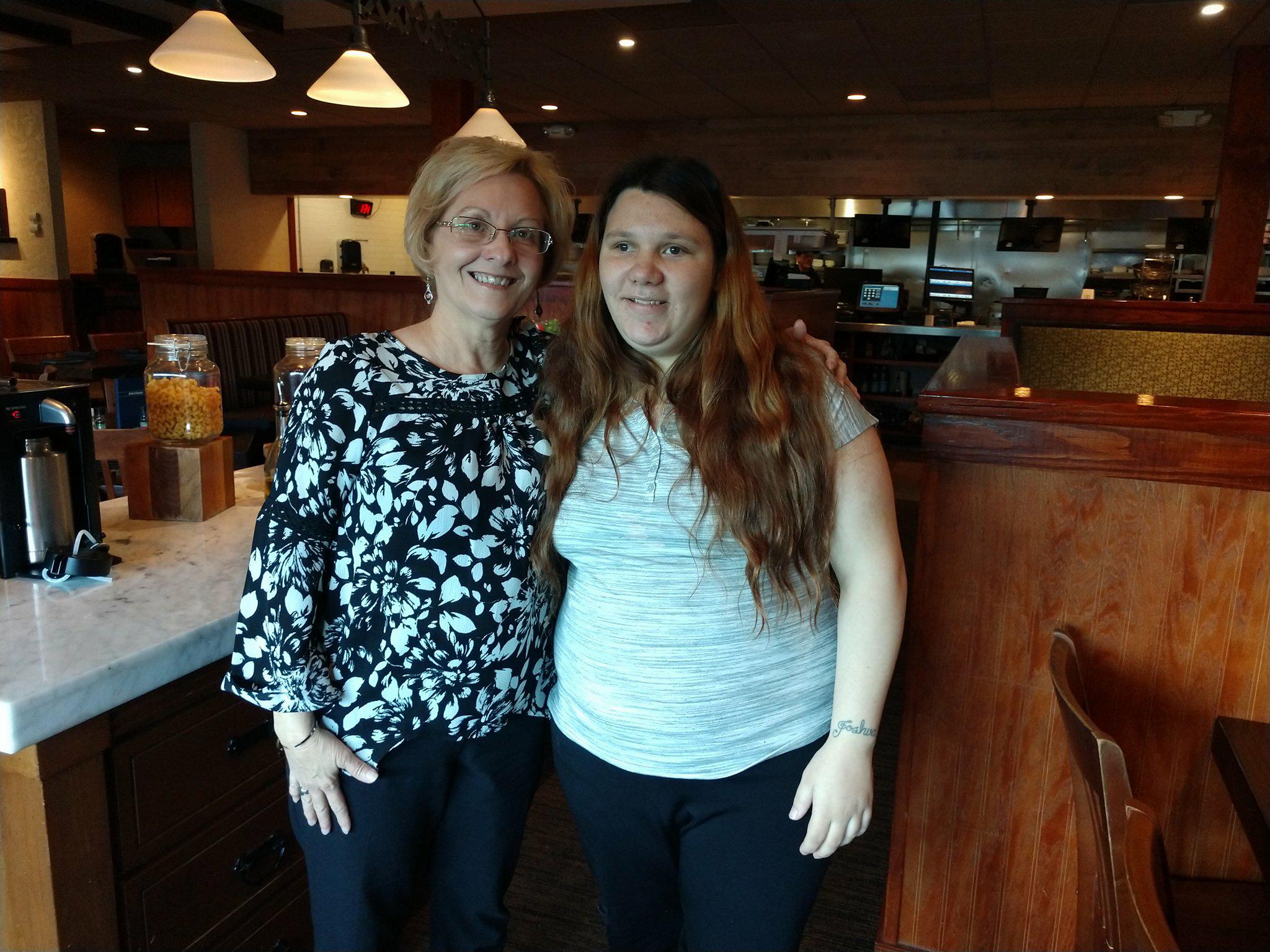 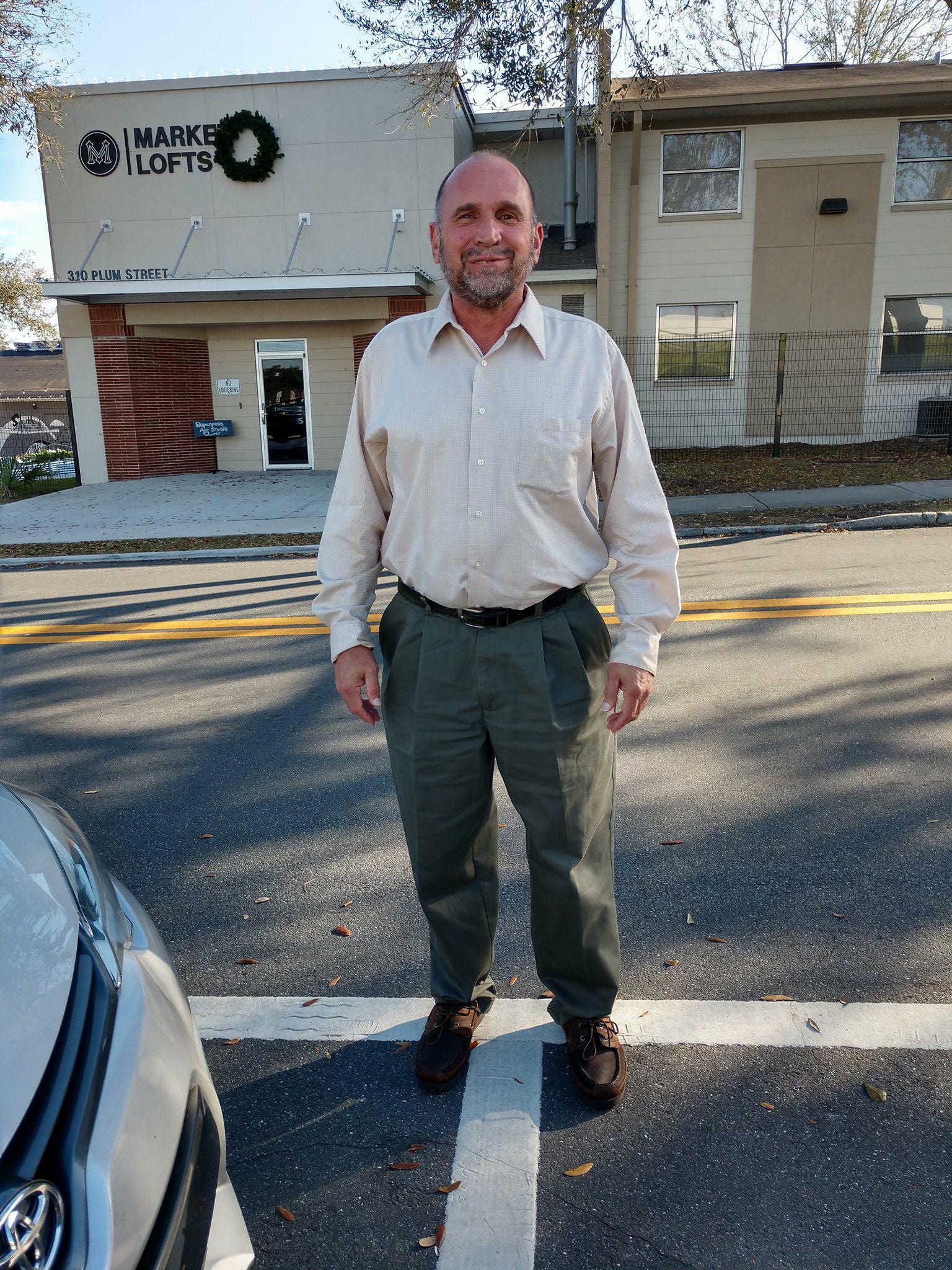 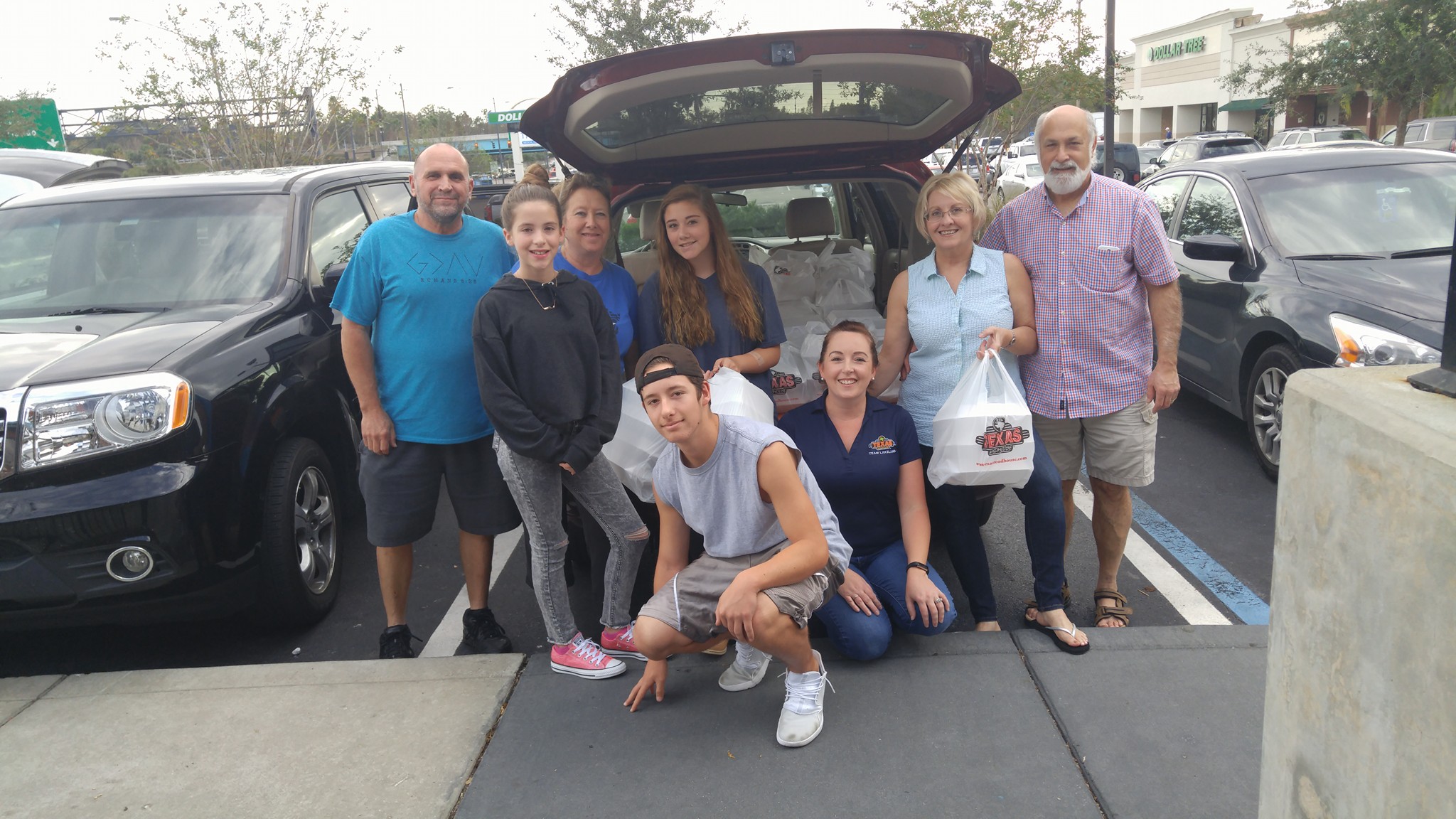 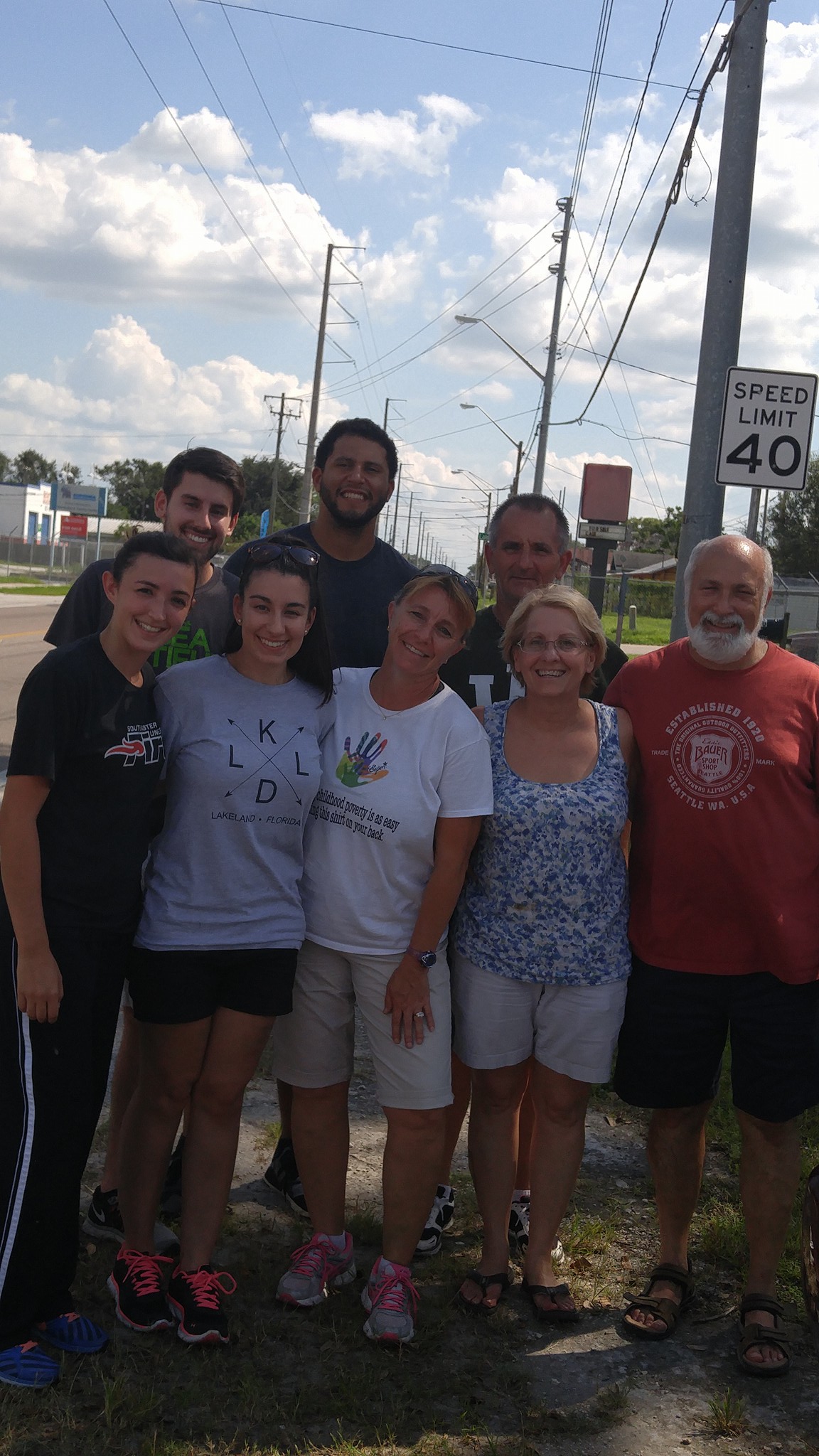 The Value in Love

Kay deeply cares about the people she works with and serves. She’ll tell the story of Wendy and Whiskers, who walked from Lakeland Regional to Harvey’s parking lot to let her know there were people on Memorial who are in worse shape than the Combee folks and needed help. She’ll tell the story of her “lovebirds”  Deb and Sparky who are getting married on Valentine’s Day.

However, her favorite story to tell is about a sit down dinner Kay and a group of volunteers put together. The entire community she had grown so close to before and after Hurricane Irma was invited, and they were encouraged to bring their friends.

“When they came, there was a different tilt of their chin. Such pride! They set up the tables, they showed their friends how to get food, introduced us like we were family,” Kay said.

The dinner wasn’t anything fancy—they were sitting around decorated tables in the Dollar Tree parking lot, listening to people tell stories and getting to know one another. Sitting there, Kay knew she was doing what she was meant to do. She was taking the time to get to know people that many would walk past. She was letting them know that they weren’t invisible, that they were valued and loved, and that of course, she was going to keep on coming back to them.

“It was the knowing that they were loved and valued and seeing just the way their shoulders were raised, their heads held high. The way they greeted people like they belonged,” she said with tears in her eyes. “To know that God had used us to sit there and love them. To take that time.”

There’s a reason that Kay makes it her priority to continually show up for people that have the cards stacked against them. Years ago, she was in their exact position. She was a 9th grade drop-out, a single mom, homeless several times, sleeping on friends’ couches, and abused. She said after she began attending church again, she felt God tell her it was time to move on to something better. She found a way to work two jobs, raise a child and go back to school to become a teacher – something she never thought was possible.

Kay reads the poem “Listen to the Mustn’ts” by Shel Silverstein to her students and kids as inspiration. She said it has helped her accomplish her goals and continues to motivate her today.

“That’s our marching orders,” she said of the poem.

This attitude of always aiming to turn an impossible situation into a manageable one, one that ends in success and not defeat, is something she tries to share with everyone she meets.

“Anything can happen because of God,” she said. “God took every single one of my circumstances and used them as building blocks – molding and shaping me. Every single step of the way, I can come alongside the people who are out there and say ‘I’ve been here. I have walked the roads that you’re walking just on the other side of town. There is hope. You can be something else. You don’t have to stay here.’”

Kay dreams of opening up a resource center right in the middle of her outreach area, which she says will help so many. She hopes more people will come together and do something to aid the homeless population in the city.

For Kay, collaboration is key, and she thinks the biggest way our city can make an impact in the lives of the underserved is by working alongside organizations that are already in place, like Combee Connection, Lighthouse Ministries, and Gospel Inc.. Her philosophy is everyone can do a little bit.

Above all, Kay’s drive comes from wanting everyone, no matter their circumstance, to feel like they belong and that they have something to give to the world, their community, or even just their friends and family.

Kay Kasser loves Lakeland and all the people in it. Whether she’s teaching people how to be healthy and cook fulfilling, flavorful meals or feeding people who might have otherwise gone hungry, she feels the generosity of our community is reciprocated.

“When you see somebody on the street, it’s not a handshake – it’s a hug,” Kay said. “They love each other, and they support each other. They sincerely look into your eyes and want to know how you are.”

We feel honored that a CityMaker like Kay lives amongst us, working tirelessly to make our city one that will extend a helping hand to anyone in need. With people like Kay leading the charge, guided by compassion, generosity, and community concern, the positive changes we all wish to see in our community can become a reality.

Just like Kay says, “We can make it happen if we all work together!”