They say the beauty of a city lies in its people, the sights being a bonus. Luckily enough, living in Lakeland affords us the best of both, uncompromised. Our potential as a community, though, has only yet to be realized.

You’ve driven down South Florida and strolled the sidewalks of downtown. From the Terrace Hotel to Lawton Chiles Middle, the buildings that give our town a face are some of the oldest in the area. Their preservation, their longevity, and the aesthetic value they add to our city are only made possible by this month’s CityMaker duo: David and Jean Bunch.

A Car And A Ticket

To tell our story, we have to tell theirs. Both David and Jean have been calling Lakeland home for just around 60 years, for their own reasons respectively. Jean came to Lakeland with her family as her dad sought to make it by big by selling valuable Florida real estate. Flash forward a few years and he owned his own real estate firm; mission completion. David’s story starts a little differently.

A 20-year-old, fresh from the army, David decided he was moving to Florida. The logistics didn’t fully matter, just that he was going – take it or leave it. In a car packed full of belongings and with eyes set on Stuart specifically, he was off. One speeding ticket later, that destination would change to somewhere a little closer to our hearts: Lakeland.

On a whim, and nearly broke after the speeding ticket, David reached out to distant family that lived in Lakeland just to say hello. He’d never met them having grown up in North Carolina, but he was passing through after all. That simple greeting turned into a job, that job an opportunity, and that opportunity a life.

David’s relatives were retired and owned a citrus caretaking business. Sensing David’s unfortunate position, they offered him a job knowing that he’d grown up on a farm and was familiar with the equipment.

“I stuck around and took that job, manual labor in a grove, and that fall I enrolled in Florida Southern College,” David said.

As a student, David’s place in our city grew alongside him. If the beautifully designed campus didn’t keep David’s eye, Jean certainly did. The two first met at Lakeland’s First United Methodist Church. Brought together by a faith that stands even stronger today, David and Jean married on December 28, 1963. Just about a decade later, the Bunches purchased what would become the start of their life’s work: a hearty, historic home built on a former cattle ranch.

A Hand And A Knee

The home was far from perfect, needing renovations galore, but it was just that: a home.

“We bought the property and the cattle along with it,” Jean said. “We decided to tackle the restoration of this house, which was built in 1914, and I became very hands-on involved with it. It was a very rewarding experience. When I finished, I was all fired up about historic preservation.”

Realizing that there wasn’t any body of people willing to advocate on behalf of our historic buildings and structures, Jean became that voice. In an effort to preserve the heritage of our town’s unique architecture and history, Jean formed an advocacy group that went by the name of Historic Lakeland. 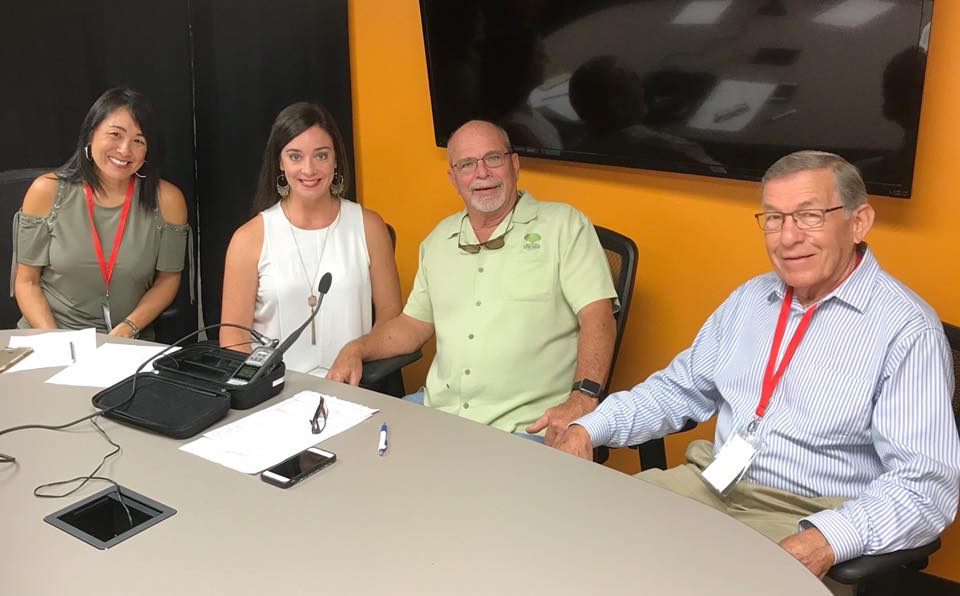 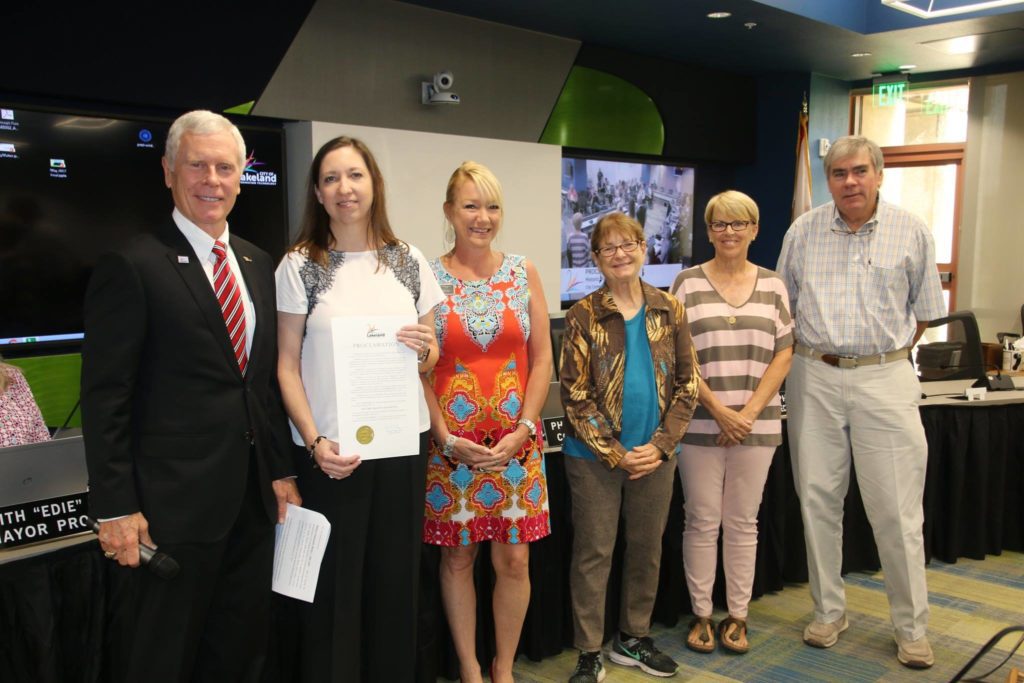 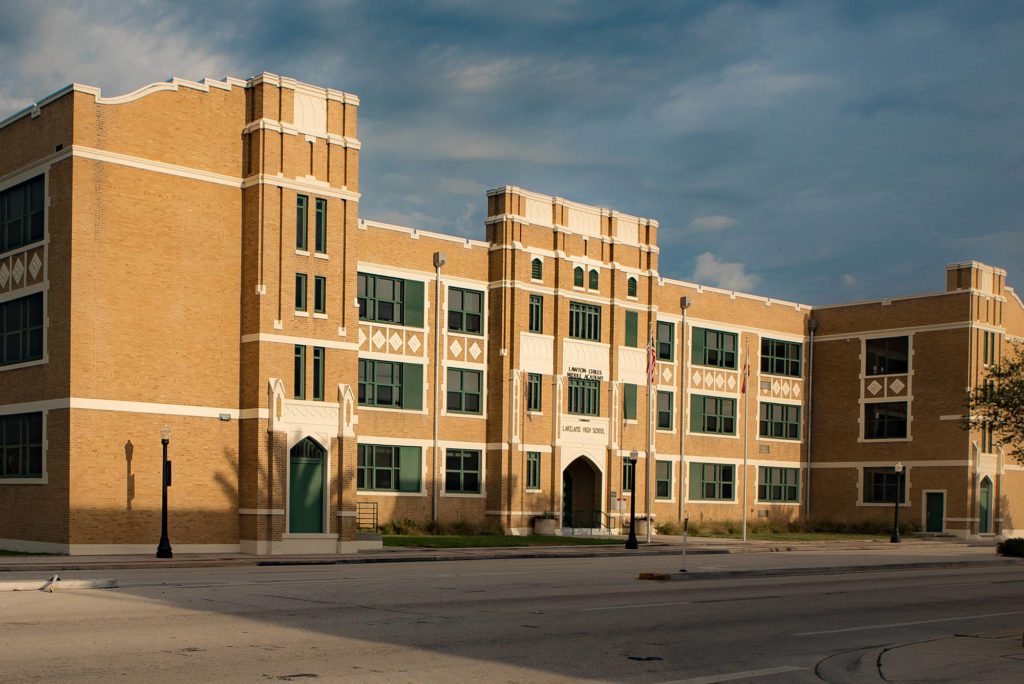 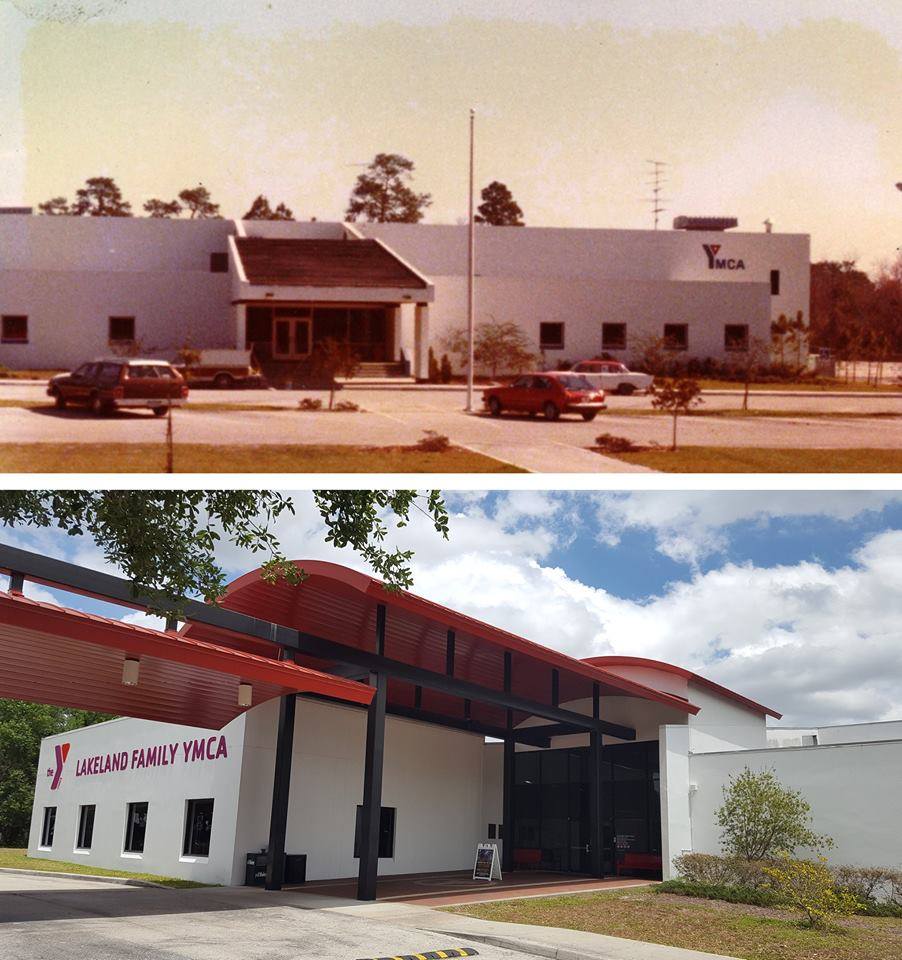 The organization’s first project dealt with the restoration of the Frances Langford Promenade at Lake Mirror, which was built between 1926 and 1928. Today, this area is a hallmark of Lakeland beauty, but it wasn’t always that way. There was a time when rusty light poles and decayed concrete banisters were commonplace in the area, much different than the holiday wreaths that currently adorn the edges of Lake Mirror. Thanks to Historic Lakeland’s efforts, the site was added to the U.S. National Register of Historic Places in 1983.

Today, Historic Lakeland’s goal is the same as it was in 1979 when it was founded: to “promote awareness, understanding, and an appreciation of Lakeland’s history, and to insure the preservation of those things which represent the character of our city and are significant to its history.” Some of the buildings it’s saved include the original Lakeland High School building (now home to Lawton Chiles Middle Academy) and the Coca-Cola Building on Lake Mirror, which now serves as the home for the Lakeland Fire Department.

“I’ve been very gratified to see that Lakeland now has a preservation ethic,” Jean shared. “I think that in the years before Historic Lakeland, decisions were made without that kind of thought.”

A Town With A Dream

The preservation of our town’s history isn’t the only thing the Bunches are up to – they’re here to leave their mark as well. In David’s case, that meant introducing our community to the YMCA the only way he knew how: by bringing it here himself.

For a time, David lived at a YMCA in Memphis, Tennessee. Room rentals at such locations served as generally cheap options that were best suited for young and old men alike looking for a place to stay. Upon his arrival in Lakeland, all his belongings in tow, David sought out the nearest YMCA only to be told, “we ain’t got one of them.”

David explained that they didn’t need a physical location for their YMCA at the start, piggybacking off the wisdom of a consultant that said they should focus on building their program first, and their location second.

To help change people’s perceptions on the type of YMCA they were trying to build, David and his team would bus Lakeland residents to Clearwater to see the family-style YMCA he was proposing for our town. Different than the traditional YMCAs seen in areas like Chicago, these family YMCAs would serve as communal spaces for suburban, family-oriented activity. It’s a bit ironic considering that’s nearly the same effort he strives for today.

A Town With A Park

Work didn’t stop with the coming of the YMCA. In the years following, David spent time giving back to our community in any way he could. From serving on local building committees to his role on the board of the Salvation Army, his passion for the betterment of our community only grew.

In recent years, David’s sole focus has been on one of his most exciting projects yet: Bonnet Springs Park. Together, he and Jean proposed a plan to the Barnett family that outlined the details for a 180-acre park area within the heart of Lakeland, mere walking distance to downtown.

The proposed park area is situated upon an old rail station, Florida’s former largest. The rail station saw use for a century before being abandoned, left as an eyesore to times gone past.

This isn’t David’s first time trying to renovate the area. In the 80s, David took on a joint venture with CSX Railroads to clear the property and develop a high-end business park. Then, recession struck, leaving David unable to fulfill his end of the agreement.

“So, I just sold my interest back to CSX, who owned the property,” David said. “That was a big disappointment because that was a major project that would’ve been good for Lakeland had it happened.”

Yet, the worst isn’t always what it seems. Leaving the property idle in inventory because of the business park fallthrough meant that it could be used for what it’s ideally suited for: an outdoors park.

“It’s a gorgeous piece of property,” David said. “It wants to be a park.”

The restoration of this area is ongoing, but final plans project this park to offer major social and economic benefits to one of the most downtrodden areas of the city. It’s as if the land speaks for itself, quietly nestled inside the hubbub of industry surrounding it.

“Where the railyards are is a plateau, but between that plateau and Lake Bonnett is a 50-foot fall with a live spring going through it,” Jean shared. “Most people in Lakeland are just oblivious to the fact that all that is there.”

Slated to open to the public in late 2020, Bonnet Springs Park is set to revolutionize how Lakelanders experience the outdoors. Featuring everything from a canopy walk to botanical gardens and an aquarium, Bonnet Springs Park isn’t just hoping to become Central Florida’s premiere outdoor destination – it’s doing everything in its power to make it so. 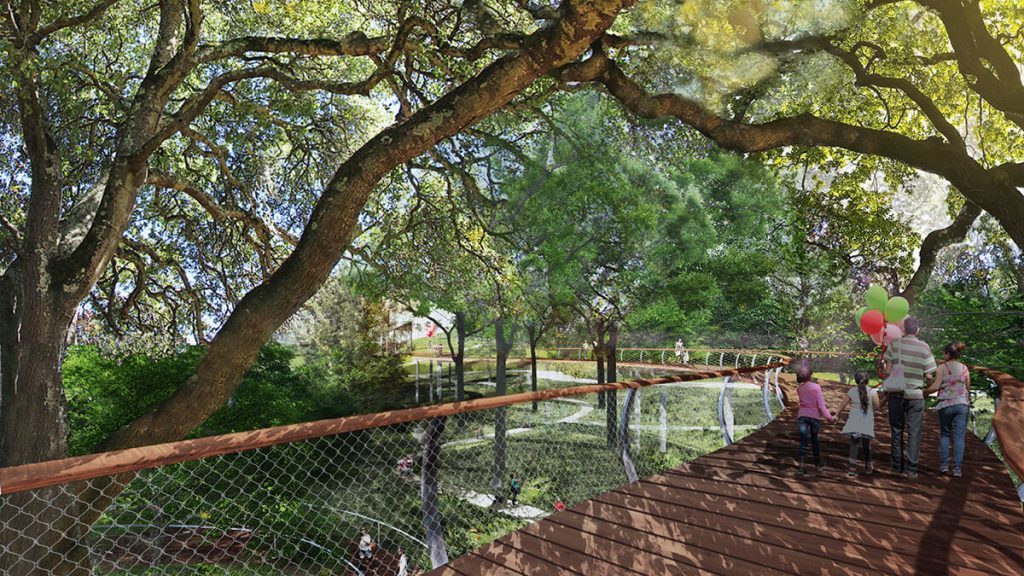 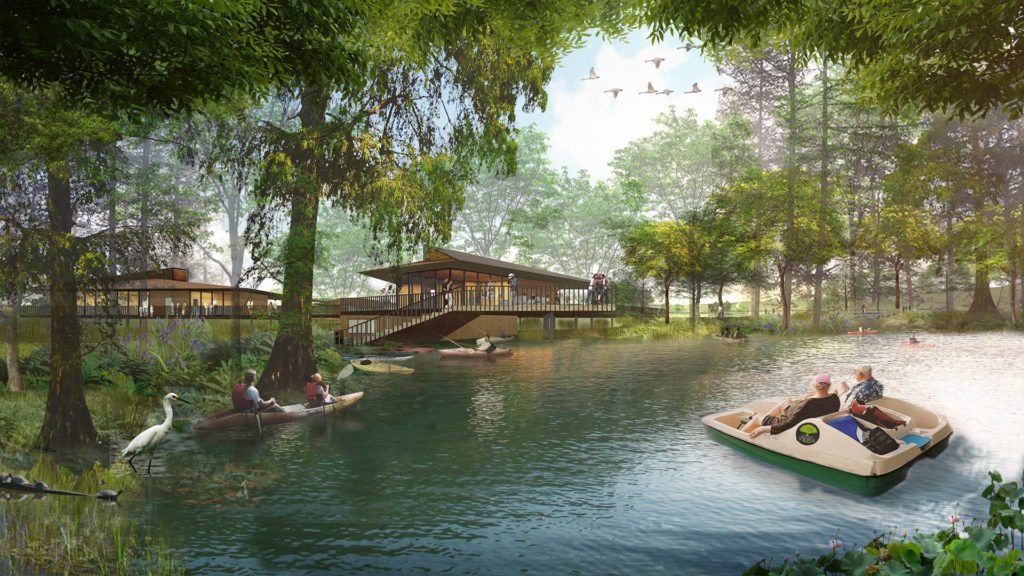 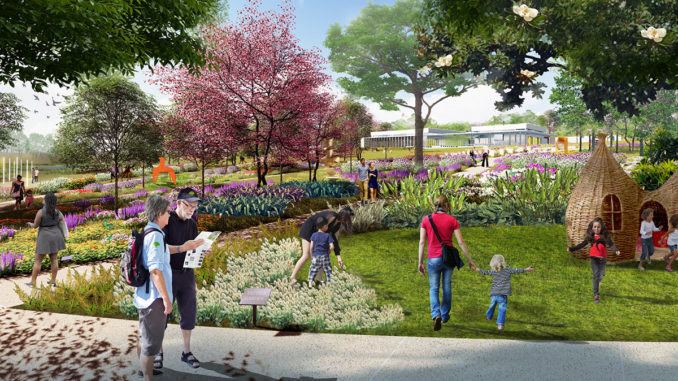 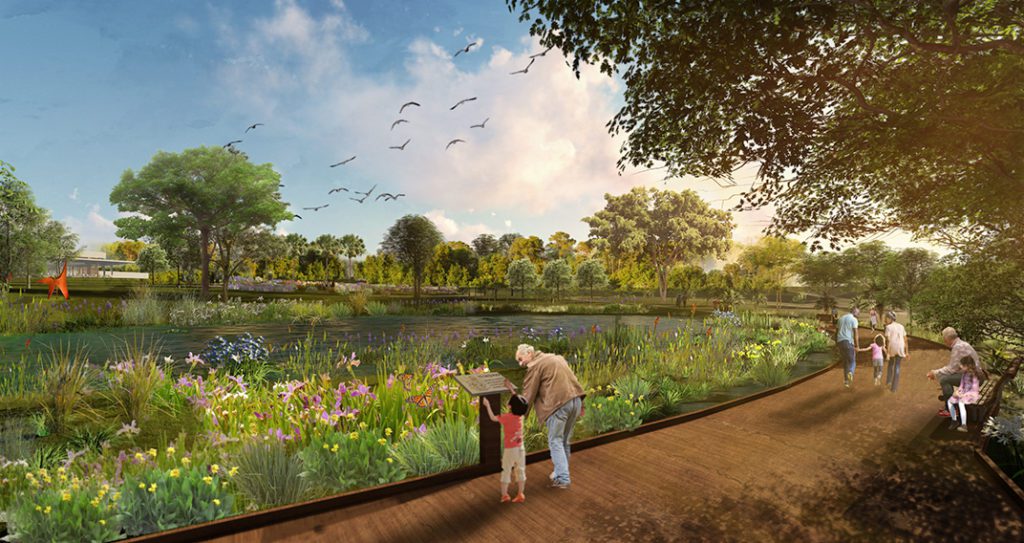 Citing the notion that every great city has a great park alongside it, David’s efforts to revitalize the Bonnet Springs area harbors welcomed change to our community. Once completed, Bonnet Springs Park will be conveniently close to both Lakeland’s downtown area as well as other residential areas, including a forthcoming apartment project that’s estimated to house some 1,700 Lakeland residents. The area will be easily accessible via most means of traditional travel, including by car, bike, and on foot, welcoming anyone to the lush amenities the park has planned to offer.

A Town With A Future

Today, things are just as busy for the two as they’ve ever been. They work together at Hauger Bunch, the very same business that Jean’s father started over half a century ago, formerly known as Hauger Realty.

They see the future of our city creeping in slowly from the major metro areas of both Tampa and Orlando respectively. The growth of our town isn’t stopping anytime soon, due in part to the potential it inherently possesses as the Central Florida corridor. From five colleges to a major medical center, Lakeland’s home to a diverse crowd of businesses, services, and opportunities.

David would know, after all – his successes all have their roots in our city.

“When you land at a place like [Lakeland], so broke, and have everything you try to do be accepted and welcomed, you can never, ever pay that back,” David said.

But that doesn’t stop him and Jean from trying. From our parks to our buildings and from our buildings to our people, the Bunches help make this Lakeland life an extraordinary one. 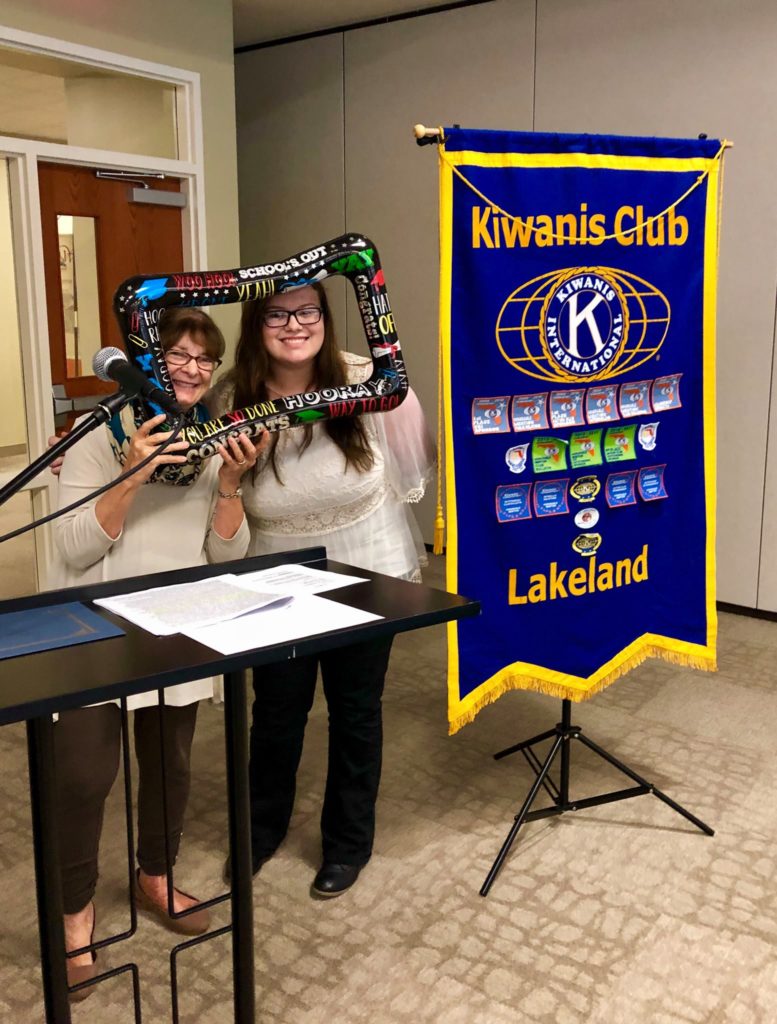 You can get more information on Bonnet Springs Park by visiting their website here.