You are here: Home1 / Past CityMakers2 / June 2018 CityMaker: Nancye Thornberry For many of us, Lakeland’s the only home we’ve ever known. For Nancye Thornberry, our June 2018 CityMaker, Lakeland’s not just home – it’s a community as strong as its senior citizens. And with almost 2,500 Polk Senior Games competitors in our county… that’s saying something.

It’s been 50 years since Nancye first moved to Lakeland. Mayors have changed and many a season has passed, but one thing has stayed consistent since 1992: the Polk Senior Games.

After a triumphant bout with cancer, Nancye experienced the Games for the first time when she went to Syracuse in 1991 to visit her brother, a National Senior Games competitor.

“My sister and I decided we’d fly up to see him perform, which we did. That inspired me, so I said, ‘I’m coming home and starting this here,’” Nancye explained. “It was a very good thing to do.”

Upon her arrival back in Lakeland, Nancye sought help from local community figures Skip Perez and Larry Libertore. Alongside the Polk County Parks and Recreation Department, the team successfully made the Polk Senior Games a reality.

What are the Senior Games? They’re a series of athletic competitions for those ages 50 and up, designed “to promote healthy lifestyles for adults through education, fitness and sport.”

From archery to walking to practically every athletic event in between, the Polk Senior Games recently celebrated its 27th anniversary in February of this year.

“I’d just like to see it continue to grow in a nice way,” Nancye said.

With almost 2,500 competitors and 700 volunteers annually, the Polk Senior Games has become a community staple, offering something for everyone from the seasoned athlete to the weekend warrior. One thing’s for sure, though – the Games bring our community closer, generating an interest in sports and volunteerism for participants of all ages.

“I think people just like to be with other people who do the same thing and compete, especially if they’re athletic. We have people who come back just to see if they can better their own record, and they often do,” Nancye explained. Some competitors, 22 to be precise, have been competing in the Games every year since its inception.

Not all events in the Games are physically strenuous. Competitors can sign up to compete in matches of checkers, chess, and even Scrabble.

Highlighting not only the athletes, the Polk Senior Games recognizes its volunteers and event managers as well through a variety of awards, one of which is named after Nancye Thornberry herself.

“I’m particularly amazed at the number of volunteers who stay with us every year and come back every year. They don’t really get anything from it except the joy of doing it,” Nancye said. 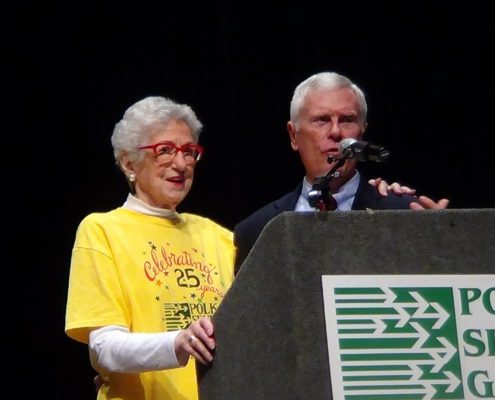 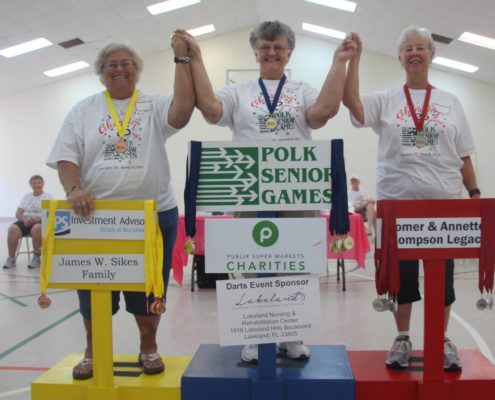 Nancye’s name may be synonymous with the Polk Senior Games, but her involvement within the city of Lakeland is much more multifaceted.

In 1974, Nancye played a key role in the opening of the Lakeland Civic Center, now known as the RP Funding Center. Three years later she was named the executive director of the Polk Museum of Art, where she would begin Mayfaire-by-the-Lake in 1978. Now attracting more than 70,000 visitors annually, Mayfaire-by-the-Lake has grown into one of the most prestigious fine arts festivals in all of Florida.

Her accolades range from being awarded the key to the city (twice!) to being inducted into the Polk County Sports Hall of Fame for her work within the Polk Senior Games. Nancye is also the proud recipient of the Outstanding Volunteer Award, courtesy of the Retired Senior Volunteers Program. Having survived cancer a miraculous four times, Nancye uses her experience as a survivor to advocate for others as a member of the Lakeland Breast Cancer Awareness Luncheon Committee.

Nancye credits a lot of her success in Lakeland to her roots in Kentucky. Elected as the first female city council member of Richmond, Kentucky, Nancye didn’t wait until she arrived in Polk County to leave marks on the communities in which she’s lived.

Nancye attended school at Eastern Kentucky University, where she’s a member of their alumni hall of fame.

The former director of the Girl Scouts Day Camp for five years, and the Junior Red Cross Program for three, Nancye’s community involvement has taken all shapes and forms.

Never one to stray from an opportunity to give back to the places that she’s been fortunate enough to call home, Nancye has held offices at both the local and state levels of the Kentucky Federation of Women’s Clubs.

There’s just something about Lakeland, though, that meshed well with Nancye and her communal values.

“Lakeland allowed me to work the way I wanted to,” Nancye said. “It grows on you, doesn’t it?”

Although Nancye’s fondness of Lakeland is something far from debate, she believes Lakeland can continue to grow into a place where differing opinions and beliefs aren’t polarized, but celebrated. Her faith in her fellow neighbor and the positive spirit of our city remains steadfast as ever.

“I think people are just kind and generous here. I have not met anybody that was rude or crude,” Nancye said.

Taking a page from her own book, Nancye uses the Polk Senior Games as a model for positive community involvement and engagement.

“The first year we hoped to have 500 people sign up, and we had 777. That was pretty good, that first year. That worked and that gave us the courage to try it again. Then the next year we had 1,111,” Nancye proudly recalls.

Ask any of the competitors and they’ll vouch for the Games, too. After all, the lives the Games have changed are proof enough of that.

Robert Dunnuck, now deceased, was one of those competitors. A decorated man, Robert was the former mayor of Fairfield, Iowa, and a master checkers player who was undefeated during his nine years competing at the Polk Senior Games. When he passed in 2003, Robert was buried with the medals he had won from the Games, a true testament to a life shaped by the extraordinary efforts of Nancye and the Games’ other organizers. 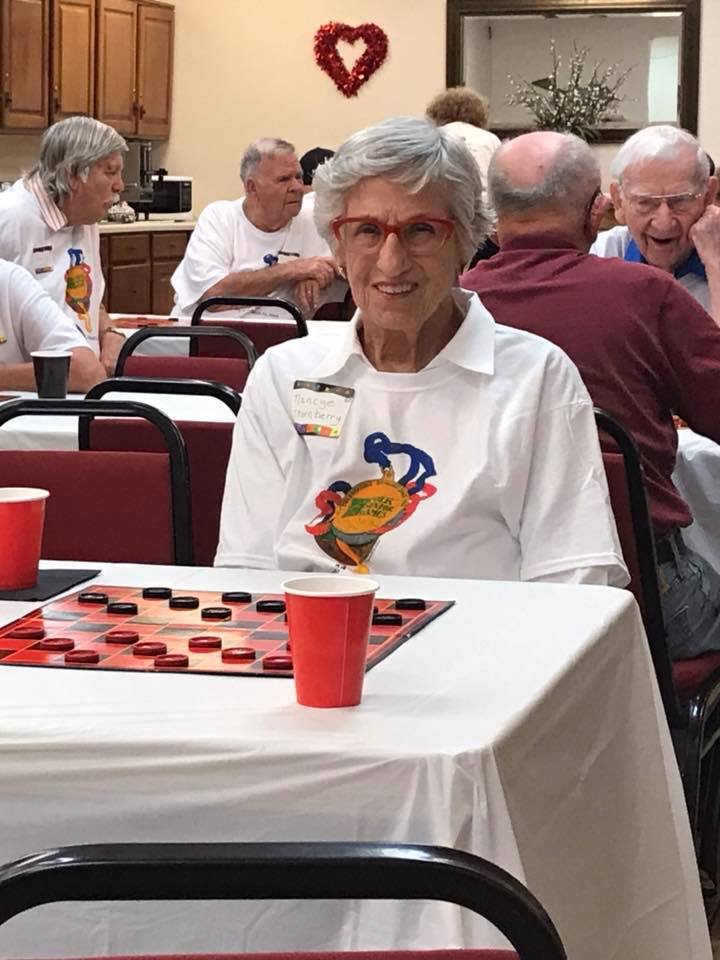 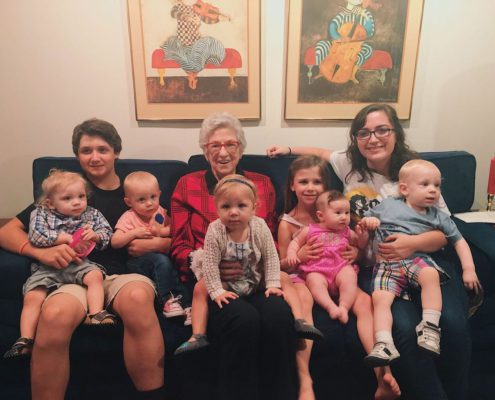 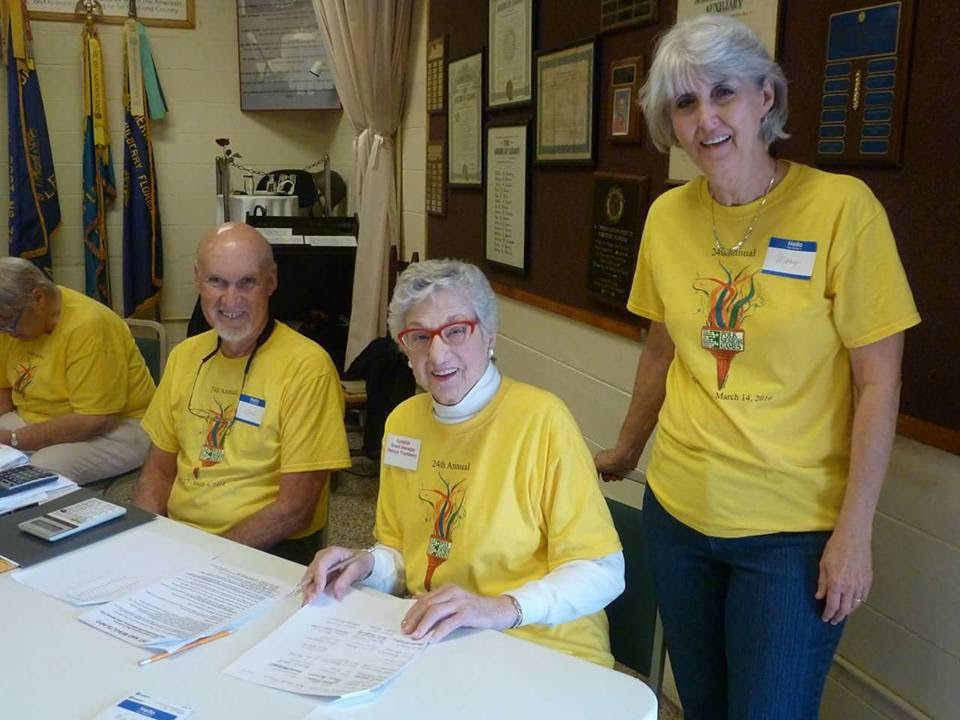 And everything yet to come

Having retired from competing herself, Nancye’s found solace in the “spirit of camaraderie” that the Games provides the community to which she now proudly calls her home. It’s not to say that she’s content with the status quo, though. Nancye’s eagerness to help those around her has only strengthened with age. Lisa Palas, Nancye’s daughter and caretaker, has seen that firsthand.

“My mother enjoys doing these things so much,” Lisa said in reference to the Games.

“My mother loves to have a project. She’s her happiest when she has a project going where she sees that it will have an impact and make people’s lives better and happier.”

Although she’s stepped down from the podium and away from the limelight, Nancye still plays an active role on the board of directors for the Polk Senior Games. She’s often recognized when she leaves home, but her focus is different now; Nancye wants to empower others in our community to believe in themselves and their ability to do good.

“If you start something, and it’s good and it continues, you can consider that you’ve had a successful venture… follow the dream you have of what it could become and what it might be,” Nancye said encouragingly.

With the CityMaker title added to her already long list of achievements and awards, Nancye hopes to use her influence as a community leader to continue promoting positive change in both Lakeland and beyond. Not that she hasn’t done that already, though. From the Games to Mayfaire-by-the-Lake, Nancye’s contributions to our community have allowed it to flourish like none other, but she’s quick to point out that she wasn’t able to do it all by herself. Citing everyone from retired Lakeland Parks and Recreation Director Bill Tinsley to her own daughters and sons, Nancye spreads the credit for her achievements as wide as the city has open arms for her.

Although Nancye’s journey wasn’t without its hardships, she’s stood strong as a pillar of our community through the toughest of obstacles. As a Lakeland CityMaker, Nancye truly epitomizes everyday “awesomeness,” something she hopes the rest of our community can strive for much the same.